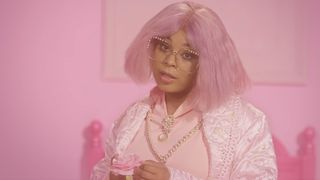 Three-time Grammy nominee Tayla Parx has released the official video for her latest single “Slow Dancing,” taken off her forthcoming project We Need To Talk.

The talented singer-songwriter, and actress held a special pop-up experience in Los Angeles on Thursday where she treated attendees by performing new tracks which included an exclusive first look at “Slow Dancing.”

See you guys @microsoft Lounge in LA on Thursday at 7pm! Premiering the next music video + performing some others ?fire music,food, games, dranksss. Come hang with me in my world ?

Omg guys !!! Last nighttttt was a moment for the books ? thank you to everybody who came out to the first #TaylaMade pop up! #Slowdancing out now on every platform ! What you think?

“Slow Dancing” follows up on Tayla Parx’s previous release with “Me vs Us,”, and the visual sees the artist in a carefree vibe enjoying all things pink, and expresses that she’s a typical girl that admires “diamonds and pearls…slow dancin’, romancin’…”

Enjoy the video above and stay tuned for We Need To Talk to make its debut soon.

For more on Tayla Parx, watch and learn how she stays creatively charged while juggling a solo music career.

Everything You Need for the Perfect Trip to the Park
SelectssponsoredJuly 7, 2020

Watch Bad Bunny Perform ‘Pero Ya No’ in a Giant Pokémon Onesie
MusicsponsoredMarch 4, 2020