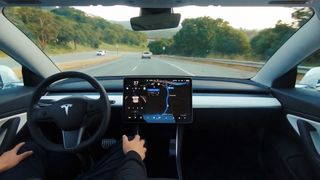 Following Tesla‘s announcement of taking on Uber with one million of its robotaxis to be rolled out by next year during its Autonomy Day event, the Palo Alto-based automotive/energy company revealed more details about its effort to bring a full self-driving system to the market with a new self-driving demo video.

Tesla Vision uses path prediction to accurately predict how a road will extend, even when it can’t see around the corner

In the two-minute clip above, the company showcases a loop of autonomous driving on the highway and other roads as well as a few intersections, displaying the ease of use for its self-driving system. As noted in the featured Instagram post, the company emphasizes its “Tesla Vision,” which utilizes path prediction to accurately predict how a road will extend, even when it can’t see around the corner.

All Tesla cars being built today have the hardware necessary for full self-driving: 8 vision cameras, 12 ultrasonic sensors, radar, and this custom-designed beast of a Full Self-Driving Computer Our new chip is capable of processing up to 2300 frames per second – a 21x improvement over previous gen hardware

The video also reveals Tesla’s self-driving system interface with new autopilot graphics to render the vehicle’s environment on the center screen. According to the company’s recent post on social media, “all Tesla cars being built today have the hardware necessary for full self-driving: 8 vision cameras, 12 ultrasonic sensors, radar, and this custom-designed beast of a Full Self-Driving Computer.”

Head on over to Tesla’s website now for additional details.

Elon Musk Reveals Tesla Cars Could Be Talking to Us Soon
DesignsponsoredJanuary 12, 2020