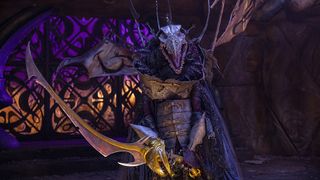 With the release date nearing, Netflix this week shares the final trailer for its prequel series to Jim Henson’s beloved 1982 film, The Dark Crystal. The Dark Crystal: Age of Resistance takes place many years before the events in the movie, highlighted using classic puppetry with cutting edge visual effects.

The world of Thra is dying in Age of Resistance, as the source of its power, the Crystal of Truth, has become damaged and corrupted by the evil Skeksis, leaving a sickness spreading across the land. Now it’s up to three Gelfling to lead a rebellion and save their world after they discover the terrifying secret behind the Skeksis’ power.

Directed by Louis Leterrier and produced by The Jim Henson Company, The Dark Crystal: Age of Resistance comes to Netflix via 10 one-hour episodes August 30.