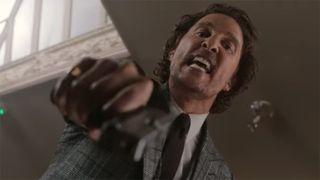 Today STX Entertainment shares the second trailer for Guy Ritchie‘s star-studded new film, The Gentlemen. We received our first look at the anticipated picture back in October, as the movie is due out in theaters next month.

Matthew McConaughey headlines The Gentlemen, playing American expat Mickey Pearson, a marijuana kingpin in London. The self-proclaimed king of the jungle, Pearson finds himself under attack from virtually every direction when his contemporaries learn he is looking to cash out of the highly profitable marijuana business. Starring alongside McConaughey are Charlie Hunnam, Henry Golding, Michelle Dockery, Jeremy Strong, Eddie Marsan, Colin Farrell, and Hugh Grant.

Ritchie writes, directs, and produces on The Gentlemen, which releases in the United States January 24, 2020.

Matthew McConaughey Is a Marijuana Kingpin in Guy Ritchie’s Star-Studded ‘The Gentlemen’
MoviessponsoredOctober 2, 2019