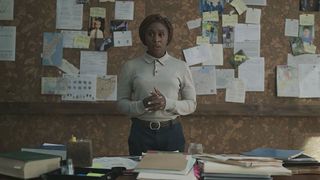 HBO has delivered a terrifying new trailer for The Outsider and it’s giving us major Pennywise vibes. See for yourself in the trailer above.

The series was co-scripted by Stephen King and Richard Price, and is based on King’s horror novel of the same name.

We were introduced to Ben Mendelsohn and Cynthia Erivo’s characters in the first trailer, which positions the forthcoming series as a crime thriller. But in the latest trailer, we get a greater sense of the supernatural aspect of the plot, particularly as it relates to Jason Bateman’s character. As part of the murder investigation of 11-year-old Frankie Peterson, Bateman’s character is mysteriously placed at the crime scene as well as at a separate location 70 miles away.

From there the trailer, and we’re guessing the story, takes a supernatural turn. For example, fans and critics have been drawing comparisons between The Outsider‘s ambiguous murderer and IT’s Pennywise. After the trailer dropped, King took to Twitter to call the series, one of the best adaptions of his work.

THE OUTSIDER is one of the best adaptations of my work. Hope you'll watch it. https://t.co/CcCtdNVn7A

The Outsider premieres Jan. 12 on HBO.

The Dead Come Back to Life in Disturbing Trailer for Stephen King’s ‘Pet Sematary’
MoviessponsoredFebruary 7, 2019

‘It Chapter Two’ is “Pointlessly Long,” According to Critics
MoviessponsoredSeptember 4, 2019
What To Read Next
Load More
Search Results
Load More