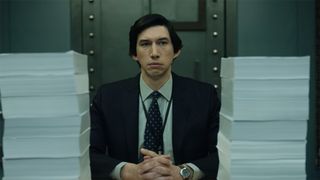 Amazon Studios will be releasing its new American crime drama, The Report, in November of this year, as today we get our first look at the anticipated film starring Adam Driver.

Based on actual events, The Report tells the story of FBI agent Daniel Jones (Driver) as he investigates the CIA’s torture of suspected terrorists following 9/11. Jones’ assignment given by Senator Dianne Feinstein (Annette Bening) is to look into the CIA’s Detention and Interrogation Program, which was created after the horrific events that took place in September of 2001. Jones ultimately finds out that the CIA destroyed tapes of interrogations of Al-Qaeda detainees.

Vin Diesel Is as Sentimental As Ever in Ominous First ‘Fast 9’ Teaser Trailer
MoviessponsoredJanuary 29, 2020