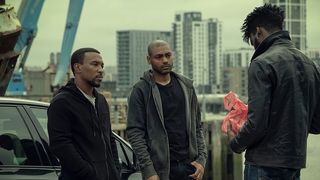 After sharing the release date for upcoming British gang drama Top Boy, Netflix shares the official trailer for Season 3. Produced by Drake, Ashley Walters’ Dushane and Kane Robinson’s Sully are back, facing new challenges as they try to reclaim their throne in the UK drug game.

The new season, which is a continuation of the Channel 4 drama that ended in 2013, picks up as Dushane returns from exile to his home in London. He teams up with Sully, his spiritual brother, partner and sometime rival who is also returning to the same streets after a prison sentence. However, since their absence, a new young, hungry, and ruthless gang leader, Jamie has risen to power and creates many problems for Dushane and Sully.