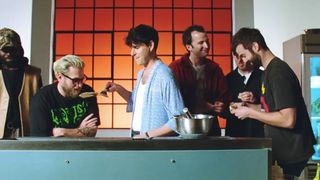 At this point, Jonah Hill shouldn’t shock anyone when he randomly appears in places that you wouldn’t expect him. We already know that he has a solid position in the music industry with untouchable figures like Kanye West, Trent Reznor, and Danny Brown in his circle so it was only a matter of time before he popped up in a music video this year. Vampire Weekend has officially done the honors by featuring him in their “Harmony Hall” video directed by Emmett Malloy.

Hill doesn’t come into the frame until the 4:42 mark where he and Dev Hynes are seen nibbling on some breakfast treats with the band while a snake slithers on some melons in a kitchen. It’s all very casual and definitely not weird. Earlier this month, Hill and Steve Lacy were spotted in Zabar’s shooting a video with Vampire Weekend for an unreleased track that will supposedly portray “a day on the Upper West Side.”

Vampire Weekend will be headlining a North American tour to support their forthcoming album Father of the Bride after it drops this spring. Watch the full video above.