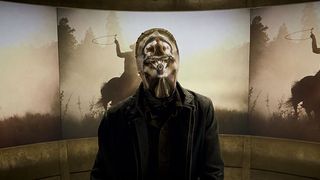 Having revealed a release date and featurette, HBO now delivers the official trailer for its Watchmen series– and it’s dark as hell and visually stunning. This is to be expected from creator Damon Lindelof who previously worked on Lost and The Leftovers.

In the official trailer, we get our best look yet at the mysterious Cavalry, the mask-wearing group of domestic terrorists, as well as the Tulsa police officers resisting them. Watch the trailer for Watchmen above. A few days ago, HBO also released a featurette which provides detailed information about the show’s storyline.