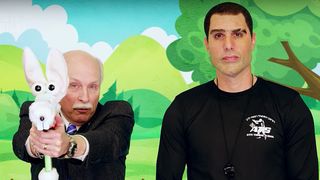 Sacha Baron Cohen has delved back into his world of disguises and satire once again, this time highlighting issues around gun control in the United States. The first episode of his new show Who Is America? aired on Showtime last night, and as we’ve come to expect from Cohen’s humor, it was at once hilarious and disturbing.

One particularly alarming clip you can watch in the preview up top. It depicts Cohen, disguised as hyper-macho Israeli gun fanatic Erran Morad, alongside Larry Pratt, the executive director emeritus of gun rights organization Gun Owners of America, endorsing a children’s gun training program. And at the 9:40 mark, he shares some facepalm-inducing “facts.”

“Children under five also have elevated levels of the pheromone Blink-182, produced by the part of the liver known as the Rita Ora,” Pratt reads from the script fed to him by Cohen. “This allows nerve reflexes to travel along the Cardi B neural pathway to the Wiz Khalifa 40 percent faster, saving time and saving lives.”

Pratt was just one of a number of political figures to be duped by Cohen inhabiting a variety of characters for the show. In the first episode, former presidential candidate Bernie Sanders is interviewed by Cohen’s Billy Wayne Ruddick, an arch-conservative from the South. And in the guns segment of the episode, credulous former senator Trent Lott appears, as well as current Republican congressmen Matt Gaetz, Dana Rohrabacher, and Joe Wilson, all led along by Cohen’s Morad persona and his “Kinderguardians” gun training program for “talented children” and “highly trained pre-schoolers.”

In future episodes, expect appearances by disgraced former Senate candidate Roy Moore and one-time vice presidential hopeful Sarah Palin, both of whom criticized Cohen in advance of the show’s debut.

Did you watch Who Is America? If you did, let us know your thoughts in the comments below.

Next, these are the 13 scariest movies on Netflix.

Not Everyone Is Impressed With Aaron Gordon’s Dwyane Wade Diss Track
LifestylesponsoredApril 29, 2020