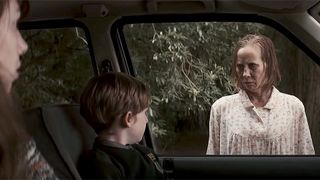 A24 has just dropped a second trailer for upcoming horror movie The Hole in the Ground, and it’s even more harrowing than the first. Watch above.

The Ireland-set movie documents the story of a young mother, Sarah O’Neill (Seána Kerslake, Dollhouse), who is trying to decipher the unsettling changes in her son Chris (James Quinn Markey, Vikings) after he goes missing in the forest behind their rural house.

The film premiered at this year’s Sundance Film Festival and already holds 86-percent-fresh certificaion on Rotten Tomatoes, with critics from outlets including Variety and Digital Spy applauding its nerve-testing atmosphere.

The Hole in the Ground is the debut feature of Irish writer-director Lee Cronin and slated to drop in the US via limited release on March 1.

A24 Continues Its Reign of Unsettling Horror With First ‘The Green Knight’ Trailer
MoviessponsoredFebruary 13, 2020

New ‘Midsommar’ Trailer Takes You Inside the World of a Pagan Cult
MoviessponsoredJune 21, 2019
What To Read Next
Load More
Search Results
Load More