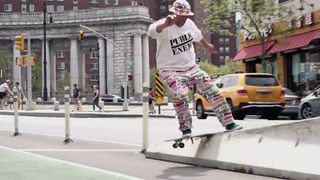 A post shared by adidas Skateboarding (@adidasskateboarding) on Jul 20, 2018 at 9:05am PDT

Joined alongside their youngest Pro team rider Tyshawn Jones, the duo are celebrating a 50th and 20th birthday this year respectively, as they flex their skills across New York City in a free-flowing eight-minute edit directed by legendary skateboard filmmaker, Aaron Meza. The visuals captures the pair meeting up with friends and strangers as they utilize the city as a creative canvas and their own playground.

Against the backdrop of New York City /// Mark Gonzales & @enwhytj during the filming of “20|50”. Watch it Friday, July 20. • #adidasSkateboarding | ? @zandertaketomo

20|50 was shot by Roger Bagley and Chris Mulhern, with highlights showcasing Jones’ display of control and power on a skateboard, and Gonzales’ spontaneous creativity. Also making cameos in the clip are fellow team riders Mark Suciu, Nestor Judkins, and Frankie Spears.

See How Tyshawn Jones Became Skateboarder of the Year in First-Ever Documentary
SkateboardingsponsoredOctober 9, 2019