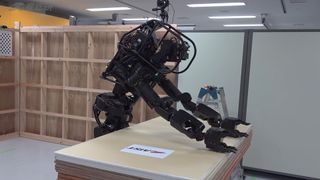 A robot revolution is purely fictional, but the current advances in science and artificial intelligence have created the rise of humanoid robots that sweat like a human, shoot perfect shot, do the perfect backflips, as well as potentially outrun you.

Now, Japan’s Advanced Industrial Science and Technology (AIST), has developed a humanoid robot that can execute a simple construction task, like installing drywall. Dubbed “HRP-5P,” the robot was created in response to the country’s labor shortage due to the declining birthrate and aging population, as it would free the number of human workers to focus on lighter and less dangerous tasks.

The humanoid robot is limited on its freedom of movement, and as you can see in the video above, the HRP-5P robot installs a piece of drywall with ease, by utilizing hooks to rest it in its rotating hands, and then nails the component into the wall.

According to AIST, the research institute hopes that humanoid robot replacement of manual labor can be implemented for assembly of large structures like houses, buildings, ships and aircrafts in the very near future.

For more, sex robots are here, and it’s scary AF.

This Japanese Computer Is Now the Fastest in the World
DesignsponsoredJune 23, 2020