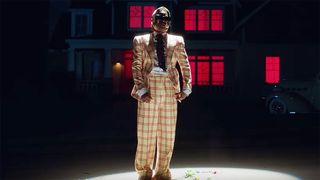 Back stateside, A$AP Rocky is prepping a new release titled “Babushka Boi.” While it’s currently unclear if “Babushka Boi” is a new track or an entire project, we do know that the Harlem rapper previewed something similar earlier this year while on tour in Minneapolis, Minnesota.

Rocky has uploaded the first trailer for “Babushka Boi” on his YouTube channel, while also posting the clip on Instagram along with the caption, “BABU$HKA BOI COMING SOON!!!.” In the video we find multiple characters attempting to answer why the rapper wears a babushka. The clip seemingly draws inspiration from Chester Gould’s iconic Dick Tracy comic strip.

You’ll want to check back with us for more surrounding Rocky’s anticipated new release, “Babushka Boi.”

A$AP Rocky Would Like to Inform You That He’s a Fully Committed Vegan
LifesponsoredAugust 28, 2019

Take a Seat & Let A$AP Rocky Teach You How to Tie a Babushka
StylesponsoredDecember 13, 2019