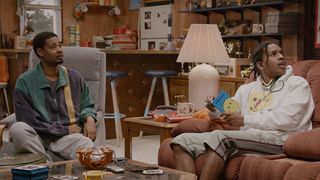 For his show Danny’s House, Danny Brown invites celebrity friends and unconventional neighbors into his basement for the ultimate hangout session. On the latest episode A$AP Rocky joined Brown in his memorabilia- and junk-filled pad, to answer the hard-hitting questions about alien sex. The rappers discussed the merits and drawbacks of smashing various extraterrestrials (and Bill Clinton).

Presented with a series of mocked-up aliens– from “futuristic Amber Roses” and Terry-Cruise-looking specimens to “malnourished aliens”– Rocky and Brown did not hold back on who they’d deem worthy to smash. The session had to come to a hilarious end when Danny Brown’s “mom” interrupted the hangout to kick Rocky out. Watch the clip above.