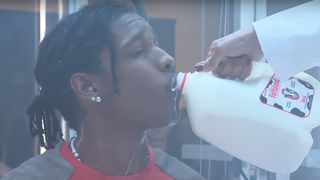 Without providing much information, Rocky tweeted out the same flyer that Highsnobiety received via email with the hashtag #TESTINGTHEWATERS.

The piece took place inside a glass box and featured the artist assisted by laboratory workers. The A$AP Mob were on hand too, dressed in attire that evoked the theme of the night as well as the title of Rocky’s upcoming album, Testing.

Over the course of roughly one and a half hours, the Harlem rapper performed a series of tasks, including eating hot peppers, and spoke on many things including loss and the challenge of recording new music. As many anticipated, the performance ended with more information about his forthcoming album; specifically he unveiled the cover art for Testing and revealed that the album is complete and ready to be released, which he also shared on Twitter.

Watch the full performance above.

Now find out everything we know about A$AP Rocky’s new album, Testing, here.

Here’s How You Can Get Flossy Nails Like A$AP Rocky
SelectssponsoredOctober 24, 2019

A$AP Rocky Will Perform in Sweden for the First Time Since His Conviction
MusicsponsoredNovember 8, 2019