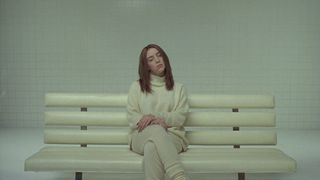 Fresh from being crowned Apple Music’s artist of the year, Billie Eilish makes her directorial debut with the official music video for “xanny.” The track is taken from her stellar debut album, When We All Fall Asleep, Where Do We Go?, which released in March.

“I’m very excited to share my directorial debut,” says Eilish. “Visuals are so important to me, and I’m very proud to be in a place where I can present my creative vision exactly as I want it. Thank you to everyone who has put their trust in me.”

The video arrives as Eilish recently became the youngest artist to receive Grammy nominations across all major categories. She is nominated for six Grammys in total. Additionally, news just broke of a reported Billie Eilish documentary that is due to release next year. Reports suggests Apple+ bought the film for $25 million.

Fans of the 17-year-old musician can catch her on her 2020 world arena tour, which kicks off in March 2020. Furthermore, you can revisit When We All Fall Asleep, Where Do We Go? underneath.