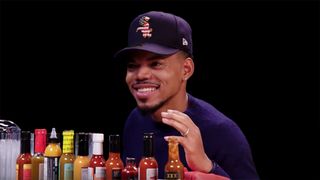 Chance the Rapper graces the Hot Ones table for this week’s all-new episode. Admittedly terrible with spicy food, the Chicago emcee does his best to contain the heat while dishing on everything from Kanye West and Lil Wayne, to Chicago’s best restaurants, and much more.

Chance begins the episode by discussing the connection between rap and comedy, then going on to insist that Shia LaBeouf is the best freestyler. From there, he speaks on the influence of celebrity sports fans and how necessary Kanye West’s Sunday Service movement is right now.

After bringing out a bowl of ice cream to alleviate the heat — a la DaBaby — Chance details the best food spots in Chicago and Lil Wayne’s fascinating recording process. Additionally, he decides to flip the script and interview host Sean Evans to close out the segment.

To see how Chance the Rapper handles the Hot Ones challenge, simply press play above.