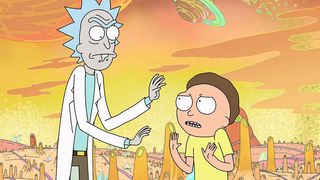 Rick and Morty co-creator Dan Harmon recently sat down with GQ for a lengthy interview, spilling details about the renewed status of the popular adult animated sci-fi comedy series, now confirmed for another 70 episodes on Adult Swim, as well as breaking down the biggest moments ever in Rick and Morty.

In the eighteen-minute video above, Harmon starts it off by talking about the episode of Pickle Rick, when Rick turns himself into a pickle to avoid family therapy, to the infamous courtcase transcript which was a reenactment of the insane State of Georgia V. Denver Fenton Allen legal proceedings, to their Carl’s Jr. & Hardee’s commercial, all the way up to the introduction of “schwifty,” and many more.

Check out a couple of the top moments in the videos below.

For more, here’s why hip-hop and ‘Rick and Morty’ are a match made in fan heaven.

Also, here are five schwifty storylines we need to see resolved in season 4 of ‘Rick And Morty.’