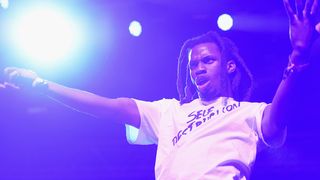 Like “Clout Cobain,” this collaborative single with “Black Balloons” finds Curry covering the dark reality of being a rapper, and boasts a more laid back and funky vibe to it.

Denzel Curry’s TA13OO won’t be delivered in a traditional fashion as well, as the Florida rapper announced that his highly-anticipated third album will be released in three acts. The first act, Light, will be released July 25, followed by Gray on July 26 and Dark on July 27.

TA13OO is the first longform statement from Denzel since his 2016 album Imperial, which landed him on the XXL Freshman cover and helped set the template for the South Florida sound that has exploded in the last few years.