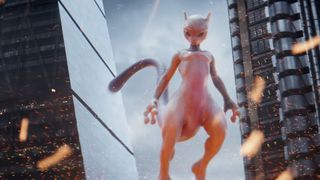 The new trailer provides more of the film’s backstory, as Pikachu reveals that he is suffering from amnesia, and even a coffee addiction, as we see him (voiced by Ryan Reynolds) stumbling around looking for clues on his identity. The clip also showcases a wide array of other beloved Pokémon characters that have yet to be shown, an adorable Cubone, a mystically fluffy Eevee, the big reveal of Mewtwo and more.

In addition, the action-packed trailer gives us a look at some of the more exciting moments, with a preview of Pikachu attempting to battle with Charizard in a cage match.

The new two-minute clip also comes a day after Ryan Reynolds posted a promo of the film on his Twitter, providing a behind the scenes look at his preparation for the role that he is taking very seriously.

In the parody clip, Reynolds explains his method approach, revealing he is so committed that he didn’t pick his daughters up from school when he got the role.

“I immersed myself completely within the world of Pokemon, I read about them, I live at his height, I tried to lose 182 pounds to match his weight… until doctors intervened,” Reynolds explained.

Enjoy the clips above as Detective Pikachu hits theaters on May 10.