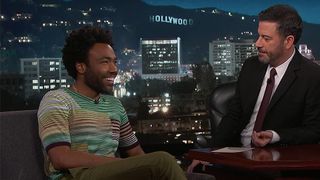 While on the road promoting Solo: A Star Wars Story, Donald Glover sat down with Jimmy Kimmel to chat about the recently-dropped “This is America” video and his role as Lando Calrissian.

While discussing the role, Glover opened up about how exciting it was for him to play a character he adored as a kid, how he revealed the news of the role to his father, and how he scored advice from Lando OG, Billy Dee Williams.

Determined to land the part, Glover revealed that he’d told his agent to put him forward: “I was like, if they’re making a Han Solo movie, Lando’s gotta be in it, and I want to be Lando.”

His enthusiasm for the part stemmed from a childhood obsession with the character. “I just really wanted to be it,” he told Kimmel. “It was like my first toy and I just love that character.”

It would seem that Glover’s love was influenced greatly by his father, who is also a “big Star Wars fan.” It goes without saying, then, that papa Glover was stoked to hear his son had bagged the role, especially as he was the first to be told: “I called my dad first and told him. That was a big moment. Like, you know, he was proud.”

Glover described to Kimmel his opportunity to gain character insight from Williams, who played Calrissian in The Empire Strikes Back and Return of the Jedi. After nerding up on the character, Glover attempted to quiz Williams on how he should approach the role:

“So I came in with all this stuff. Maybe Lando’s from this planet, maybe he did this. Just all these maybes and questions, and I just laid it all out there. It was funny because I don’t even think he was looking at me when he said it. He went: ‘I don’t know. Just be charming, man.’”

During the interview, Glover also discusses his internet-breaking video for “This is America,” revealing he hasn’t been online since it dropped. He explains that he’s sensitive to criticism, joking “I see one negative thing and I track that person down.”

Watch the clip above, then check out Solo: A Star Wars Story when it opens in theaters May 25.

Are you hyped to see Donald Glover as Lando Calrissian ?

In other news, Bad Boys for Life just confirmed its release date.

Here’s Who Our Fave Celebs Are Endorsing in the 2020 Presidential Elections
MusicsponsoredFebruary 4, 2020
What To Read Next
Load More
Search Results
Load More