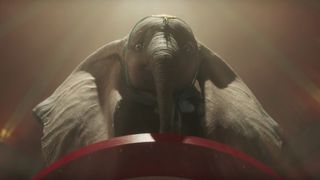 Disney and Tim Burton‘s Dumbo live-action remake has received another trailer, following the initial sneak peek this past fall.

The one. The only. #Dumbo pic.twitter.com/leZKwbbNOB

The upcoming movie is a remake of the iconic 1941 animated film and in this latest international trailer, it showcases Dumbo’s introduction to the circus and features the circus owner (Danny DeVito), describing baby Dumbo as a “face only a mother could love” because of his giant ears. However, the discovery that he can fly due to his large ears eventually changes everything.

Dumbo also stars Colin Farrell as the former circus star who is now unable to perform due to an injury, along with Michael Keaton as the villainous entrepreneur Vandemere, who aims to capitalize on Dumbo’s magical skill. The film also stars Eva Green as trapeze artist Colette Marchant and Alan Arkin as J Griffin Remington, a Wall Street tycoon

Enjoy the new trailer above as Tim Burton’s live-action adaptation of Dumbo hits theaters on March 29.