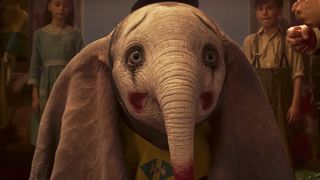 The latest trailer for Disney and Tim Burton‘s Dumbo live-action remake has arrived, and the movie looks set to be an emotional affair. Watch above.

Containing a few cute nods to the OG 1941 animated movie, such as the mouse decked out in a marching band ’fit and a magic black feather, the trailer packs in a lot of dream-like charm alongside some typically Burton-esque dark drama. If you’re unfamiliar with the source material, the story follows newborn elephant Dumbo, whose oversized ears render him the butt of all jokes at the circus — until it’s discovered he can fly.

Dumbo arrives in theaters on March 29, 2019. Will you be watching? Let us know in the comments.

In other news, documentary ‘Netflix vs. the World’ explores how the streaming service changed TV and movies forever.