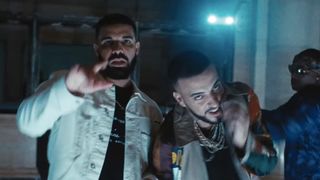 After releasing the track late last month, French Montana is back with the official music video for his new Drake collaboration, “No Stylist.”

As previously mentioned, the New York-inspired song serves as a celebration of the rule-breakers in music and fashion. Subsequently, we see a number of stylistically influential individuals featured throughout the Glenn Michael and Christo-directed aesthetic, including A$AP Rocky, Young Thug, Cam’ron, Slick Rick, Luka Sabbat, and Dapper Dan.

“I always felt like [the Bronx] got overlooked when it came to fashion,” French Montana told Zane Lowe during the “No Stylist” premiere last month. “And I feel like people that changed fashion was the icons that we looked up to like Slick Rick when he came out with 40 chains on all the vintage looks and even brings it up to date. When Cam’ron came out with the pink Mink and everybody you know it’s just people that changed culture because everybody thinks if you go to Fashion Week you know how to dress. That’s not, there’s ninety nine point nine people out there that don’t go to Fashion Week they could dress better than anybody on that runway. We want to give that dope boy on the corner.”

Press play above to watch French Montana and Drake’s “No Stylist,” and be sure to stay tuned for more surrounding French’s upcoming album.

In other music news, Lil Wayne’s ‘Tha Carter V’ debuts at number one on the Billboard 200 charts.