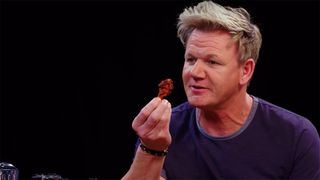 Following a teaser, the time has now come, as Hot Ones premieres its much-anticipated episode with none other than chef, restaurateur and television personality, Gordon Ramsay, who is reportedly the show’s most-requested guest. As he is known to do, Ramsay holds back no punches during the interview program, all while testing himself with the spicy chicken wings.

During the season eight premiere, Gordon discloses the most grotesque things he’s even witnessed in a kitchen, food industry secretes and how to make the perfect burger. He also dives into his chef influences, his most intense daredevil moments and food trends on social media.

To see how Gordon Ramsay fares with the hot wings challenge, press play above.

My mouth is still burning ! Hot as Hell https://t.co/JWJ7fdEfjT