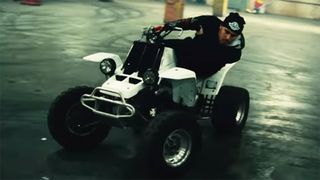 Higher Brothers‘ sophomore LP Five Stars is being pegged as the biggest Chinese hip-hop album to date. This week, the buzzing rap group returns in support of the project, sharing the official music video for “Flexing So Hard.”

Directed by Kid Art — who has worked with the likes of Drake, Meek Mill and Pusha-T, among others — Higher Brothers’ “Flexing So Hard” video showcases the hip-hop collective in their element, shooting dice and whipping four wheelers while wearing the likes of Supreme and Anti Social Social Club.

Higher Brothers dropped Five Stars less than a month ago, as the album boasts features from ScHoolboy Q, J.I.D., Soulja Boy, Denzel Curry, Ski Mask the Slump God and more. In support of the project, the group is headlining a 27-date world tour through China, North America and Europe. See below for dates and locations, then head here to purchase tickets.