House of Pharaohs follows in the footsteps of iconic UK rap groups such as So Solid Crew, Boy Better Know, and Roll Deep. Last year, they caught the attention of Frank Ocean who playlisted them on his Beats 1 show and they’ve kicked off 2018 with a slew of group and solo releases that are racking up plays on Spotify and YouTube. While numerous comparisons could be drawn with fellow contemporary British collectives or those across the Atlantic (Section Boyz, 67, A$AP Mob, Odd Future), House of Pharaohs offers something undoubtedly unique: young, homegrown talent that’s not rapping about guns or drugs but, instead, providing London’s music scene with a refreshingly authentic energy.

In spirit of Nike’s ongoing celebration of local talent, we spent a weekend with crew members Bandanna, AJ, Danny Stern, Kevin Taylor, BlazeYL, and Sam Wise on their home soil in South London to find out more. Check out the video and then read the full feature below. 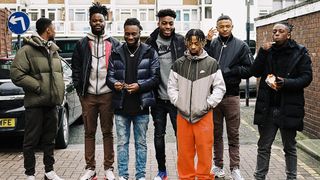 House of Pharaohs doesn’t really have a traditional origin story, in fact, it’s as if House of Pharaohs wasn’t something they invented but rather discovered. “Some things you just can’t explain, but you could say it’s written, it’s right, and it just is,” they tell us mystically when asked for the umpteenth time exactly how the crew first met.

What we do know is that they’ve known each other for varying amounts of time but most of them met while still in school, introduced through a network of friends based in South London. “I think my place here in Kennington is actually one of the first places we all came together,” explains Sam Wise. This, we gathered, would’ve been about five years ago before they started affiliating officially as House of Pharaohs in 2015.

Wise, the spitting image of Lil Wayne, tells us that his house has remained the crew’s nerve center ever since, “When everyone turned up at the house I think it was a bit of a shocker but my mum’s not the type of person to kick everyone out.” In the early days, they would also get together in London’s Hyde Park and the now-defunct Trocadero entertainment complex in the West End, freestyling, skating, and generating ideas.

Despite their jaunts, there’s one place that has influenced their music more than any other and is the only place they’d call home: South London. Locality has always been an important part of UK rap culture and remains equally as important to the next generation of UK rap talent as it was to their predecessors. Not only do neighborhoods regularly feature in lyrics, they play a role in shaping an artist’s mentality, “Where you’re from reflects in your behavior, in your art, in your speech,” they tell us.

To this end, House of Pharaohs describes what they’re doing as homegrown and rough around the edges, some of their music is even made in their bedrooms. “Where you are recording and where you are creating is gonna have a big part to play in what you actually create,” they explain. For some of them, South London meant living in less privileged neighborhoods but this adversity has led to resilience, fearlessness, and freedom from expectations. “South London has a lot of character to it that rubs off on you and everything you do,” they continue.

In representing South London, they manage to avoid the violent territorial tropes that feature in the lyrics of some of their contemporaries. They’re a product of the environment, but it’s not their be-all and end-all, and while locality was a common thread that helped bring them together, it’s their individual identities and collective character that helps to maintain the bond. “I think what connects us is the fact that we are all free spirits,” they say. “The beautiful thing about House of Pharaohs is that we’re all individual creators that have come together, we’re all eventually gonna be doing our own projects.”

Afterall, House of Pharaohs isn’t purely a music collective, while Bandanna, AJ, Danny Stern, Kevin Taylor, BlazeYL, and Sam Wise represent the musical side of the group, other members’ interests lie in fashion, filmmaking, acting, business, and design. While their individual paths might have converged, they maintain the freedom to focus on personal projects. Sam Wise, for example, recently jumped on “100 Degrees” with French-born East Londoner Octavian and released solo track “Lizzie” last year. Equally, Bandanna and Blaze have already released solo records this year too.

Having learned from the crews that came before them, House of Pharaohs are taking full advantage of their collective talent and working as a group has proved beneficial in more ways than one. “Coming together, uniting as a people, we’ve built something bigger that helps us progress as individuals. We make each other stronger. We learn from each other. We feed off of each other’s energy,” they explain. And for a group of young males, they’re incredibly supportive of one another too, “We provide ourselves with a support system, if there’s something we’re nervous about, we can discuss it and get other people’s perspectives.”

Being a collective has also benefited their growth and popularity, each member of the crew has a unique network of friends that support them as individuals, but when they come together the entire group feels and benefits from the support. Friendly competition within the group has been equally indispensable to the development process, “We are [competitive] in a friendly way ‘cos we want each other to grow. When I do something that’s cool I think to myself, ‘I know the mandem feel more motivated right now and want to get moving.’”

And since starting out three years ago, House of Pharaohs hasn’t really stopped moving. The crew has been on a continuous onward and upward trajectory that’s led to tracks like “RWM (Run With Me)” which was featured on Frank Ocean’s Beats 1 show and “London’s Finest.” They recently caught the attention of DJ Tim Westwood who had them on his “Crib Sessions” show and featured briefly in the viral “Nothing Beats a Londoner” Nike ad. For now, the collective is dropping its latest EP The Fix on March 26 featuring four previously unheard tracks, one of which (“Hundreds”) features in the video above, and “Take Flight,” which hit YouTube in February.

“I think there are no boundaries, we can do anything. People are excited by our energy, they want us around, and that will take us far.”

With their broad range of interests and skills and youth on their side, the House of Pharaohs story is just beginning. Keep up to date with all their latest movements on Instagram, Twitter, YouTube, and Facebook. Find out more about the Nike sneakers they’re wearing here, including the new Nike Air Max 270, by visiting the link below.