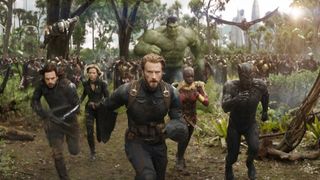 In a video for Wired, directorial duo the Russo brothers have broken down the characteristics and power sets of every hero that appears in Marvel’s Avengers: Infinity War.

In the video above, Joe and Anthony Russo deliver numerous interesting tidbits, from how they feel about the characters themselves — Tony Stark is “flawed” yet “eminently relatable,” while the Scarlet Witch is perhaps the most empathetic — to how the characters’ story arcs might develop over Marvel’s upcoming movies. We won’t post any spoilers here, but if you’re up to speed and intrigued, peep the clip up top.

For anyone who’s seen the film, you won’t be surprised that — even though the Russos summarize each character fairly quickly — the video is almost 20 minutes long. There are a lot of characters in Infinity War.

After you’ve checked out the full breakdown, share your thoughts in the comments below.

For more ‘Avengers’ content, take a closer look at the VFX in ‘Infinity War.’

Watch the Deleted ‘Avengers: Endgame’ Scene That Has Marvel Fans in Tears
MoviessponsoredJuly 29, 2019