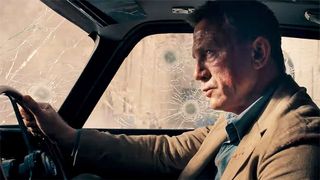 After dropping the first teaser on Monday, the first full length trailer for the new James Bond movie, No Time To Die, has arrived. And, we’re happy to stay, it features all the intense action sequences, bold one-liners, and sharp suits we hoped for. Watch above.

When the film lands in theaters globally next April, it’ll mark Daniel Craig’s final outing as 007. As you can see from the clip, he’s set to go out in style. Building on the initial 14-second teaser, here we get a closer look at the typically insane stunts and luxe whips, helicopters, and bikes he’ll be cruising in this time around.

The trailer also delivers a closer look at Lashana Lynch (who’s tipped to be the next bond) and the first real look at Rami Malek’s villain in action.

No Time To Die will hit theaters nationwide April 8, 2020.

You Can Buy Off-White™ and fragment 1s at One Block Down Today
SneakerssponsoredFebruary 19, 2020
We Recommend

The First Trailer for Quentin Tarantino’s ‘Once Upon a Time in Hollywood’ Just Dropped
MoviessponsoredMarch 20, 2019

Charles Manson Makes His First Appearance in New ‘Once Upon a Time in Hollywood’ Trailer
MoviessponsoredMay 21, 2019
What To Read Next
Load More
Search Results
Load More