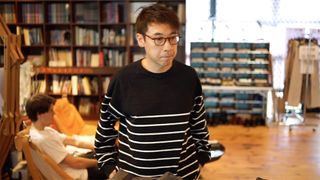 Jun Takahashi presented UNDERCOVER‘s first-ever solo menswear show in Paris just last month, as the designer created an expansive eight collections for the monumental moment. Takahashi looked to Walter Hill’s iconic 1979 film The Warriors for inspiration, honing in on the eight street gangs that jockeyed for position in New York.

Thankfully, Takahashi chose to document the process surrounding his SS19 collection, thus presenting a documentary aptly titled The New Warriors. In the film, Takahashi details the inspiration for the collection, then taking us from concept to creation. We also get a behind-the-scenes look backstage, as well as a glimpse at the much-deserved afterparty with Raf Simons.

In speaking with i-D on his SS19 menswear undertaking, Takahashi had this to say:

“The biggest thing was to be able to show lots of different sides of UNDERCOVER in a single show. We took what we’d done so far, from the punky stuff right through to the folky stuff, mixed it all together with a bunch of new angles thrown in, and then spread that across the collection as a whole.”

For more on Takahashi and UNDERCOVER’s SS19 project, press play above to watch The New Warriors.