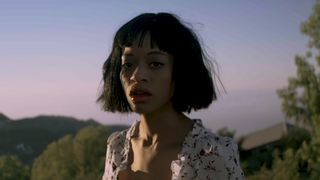 Kilo Kish co-directed the visual with Elliott Sellers, and it evokes a cinematic experience that spotlights Kish fighting with a doppelganger inside a Los Angeles mansion to essentially reflect an abstract perspective of the song’s themes of self-doubt and fighting inner demons.

In an interview with i-D, the artist delved in more about the theme. “‘Void’ is a video about the death, rebirth, and resurrection process, and also fighting against the things that don’t want you to be you and actually triumphing.” Kish said. “I think when we try to create sometimes there is real opposition and real setbacks in projects and work or even in relationships, and sometimes it’s this imaginary force that doesn’t actually exist.”

Additionally, she also revealed that popular films such as Alien, Little House on the Prairie, and Gone Girl gave her additional references and inspiration for the visual’s overall aesthetic.

You can catch Kilo Kish live when she performs at The Gorillaz’s Demon Dayz Festival in Los Angeles on October 20.

For more on the artist, read our exclusive interview with Kilo Kish here.

KITH’s New Spring Collection Focuses on the Transitional Phase of the Season
StylesponsoredMay 21, 2020