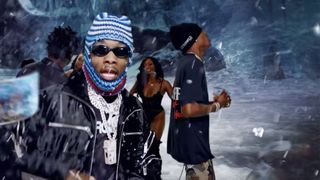 Kodak Black released the official video for his hit song “ZEZE” featuring Travis Scott & Offset, and Twitter has some thoughts.

The apparently low-budget, behind-the-scenes video, directed by non other than Travis Scott, features the rappers in ridiculous locations, along with twerking dancers and cars (of course). Thanks to the green screen, they can be seen casually rapping underwater, in a snow storm with cash raining down, and on an active volcano.

Twitter has been enjoying the video very much, but whether it’s genuine enjoyment or for the meme potential is a different story. Check the reactions below.

why the hell is offset dressed like a chao in karate in the zeze video?? pic.twitter.com/s6kuT93czV

Me trying to figure out if the ZeZe music video is shit or is there some irony there that I don't quite get pic.twitter.com/Dxpm4lSSYy

If you haven't seen the ZEZE music video yet go do yourself a favor and watch it Kodak,Trav and Offset some dorks?

This ZeZe video lmao WHAT WAS THE BUDGET!?! pic.twitter.com/5apeg9iUEw

That ZEZE video is so trash pic.twitter.com/BrwNmHIrss

the music video for zeze is very meme worthy pic.twitter.com/10x6UsV3jV

me at this ZEZE video pic.twitter.com/ytd0MEEmUr

I just wanna say that Zeze has music video of the year LMFAOOO I couldn’t stop laughing omfg ??

What did you think of the video? Comedic genius or just low-budget?

Speaking of rappers doing unusual things, check out the recipes we made from Snoop Dogg’s new cookbook.