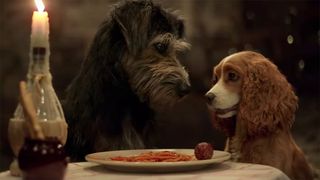 As news continues to pour in surrounding Disney‘s anticipated new streaming service, Disney+, here we showcase the first official trailer for the studio’s live-action remake of Lady and the Tramp. Directed by Charlie Bean (The LEGO Ninjago Movie), the film is an adaptation of Disney’s 1955 animated movie of the same name, based on a Cosmopolitan story by Ward Greene, titled “Happy Dan, The Cynical Dog.”

Tessa Thompson and Justin Theroux star as the titular characters in Lady and the Tramp, as Janelle Monáe voices singing pound pup Peg, and Thomas Mann and Kiersey Clemons play Lady’s owners. The movie follows the same plot as the original, with Lady and Tramp coming together despite their differences to embark on an unexpected journey.

You can look forward to the live-action Lady and the Tramp remake releasing on Disney+ November 12.