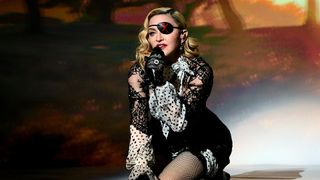 Following the release of “Medellín” and “I Rise,” Madonna shares the latest single from her upcoming album, Madame X. On “Crave,” which is co-produced by frequent Kanye West collaborator Mike Dean, the iconic singer-songwriter links with none other than Swae Lee.

Press play above to stream the collaborative tune.

Co-written by Madonna and Starrah, “Crave” accounts for the third of five songs to be released prior to Madame X‘s arrival. Fans of the pop queen can look forward to the Jamaican dancehall-esque “Future” featuring Quavo dropping on May 17 and “Dark Ballet” on June 7. Also, the official music video for “Crave” will be here soon.

Madonna’s new studio album, Madame X, is due out globally on June 14. You can catch the 60-year-old entertainer on tour in support of the LP now through the remainder of the year. Simply head here for tickets.

Swae Lee Links Up With Drake For New Track “Won’t Be Late”
MusicsponsoredAugust 16, 2019