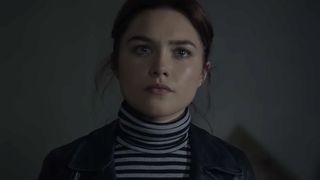 It’s October, which means Halloween, which means a fresh spate of blood-curdling horror flicks. Next up is Netflix’s haunted house horror/thriller Malevolent, whose trailer you can watch above.

The creepy teaser starts off fairly innocuously as sibling scammers Angela and Jackson rock up at Mrs. Green’s former orphanage, the site of a series of murders of young girls. The con is on, with Angela preying on unsuspecting dupes with her claims of being in contact with the dead. Little do she and Jackson know that their fakery is about to encounter some very real and seriously creepy paranormal activity.

Malevolent stars Florence Pugh, Ben Lloyd-Hughes, and Celia Imrie, and arrives on Netflix on October 5. Let us know if you’ll be tuning in.