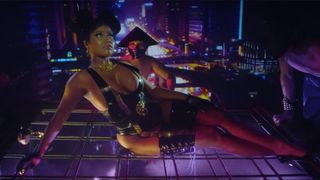 Following her “selfie video,” Nick Minaj is back with the official clips for her two new singles, “Chun-Li” and “Barbie Tingz.”

Directed by Steven Klein, the aesthetic for “Chun-Li” finds Nicki in an Asian sex dungeon, forced to battle her adversaries. The “Barbie Tingz” visual, directed by Giovanni Bianco and Minaj, then showcases the 35-year-old rapper in a number of outlandish outfits, being worked as a puppet with strings.

See above for “Chun-Li” and underneath for “Barbie Tingz.”

As a followup to the two tracks, Nicki also recently joined with Young Thug on “Anybody.”

In other music news, Rihanna is reportedly making a reggae album.