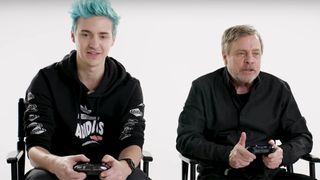 For the latest episode of Xbox Sessions, world-renowned gamer Ninja teaches Star Wars legend Mark Hamill how to play Fortnite. The video arrives as Ninja just debuted his first sneaker with adidas and Hamill’s The Rise of Skywalker is now out in theaters.

While playing Fortnite with Ninja and his sons, Hamill dishes on his charity work and the process of voice acting. He also discusses his connection to gaming, revealing that he would bond with his children over video games. To close out the segment, the 68-year-old actor/writer takes a moment to compliment the graphics of Fortnite, insisting he’d like to play more.

Press play above to watch Ninja and Mark Hamill bond while playing Fortnite, and don’t forget, Star Wars: The Rise of Skywalker is in theaters now. Here’s what critics are saying above the movie.

How to Watch the ‘Star Wars: The Rise Of Skywalker’ Event in ‘Fortnite’ Today
MoviessponsoredDecember 8, 2019