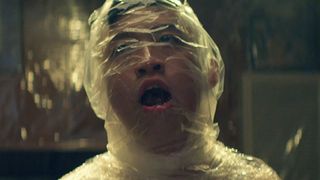 Rich Brian is back in action with his first new song of 2019, “Yellow.” The track marks a departure from much of his previous work, as he’s properly singing on the track, assisted by Bekon, who worked on Kendrick Lamar’s DAMN.

Some fans were so surprised at the sounds of “Yellow” that Brian’s label 88rising had to confirm via Instagram that it is indeed the artist’s voice the entire track. Shortly after sharing the song, Rich Brian dropped the official video. Watch the Dave Meyers-directed visual above.

In a new interview with Complex, he shared that his sophomore album The Sailor will arrive July 26.  Prior to “Yellow,” Rich Brian appeared on 88rising’s collaborative album Head in the Clouds. The crew’s festival of the same name will hold its second edition this year on August 17, featuring Joji, Rich Brian, Higher Brothers, Niki, AUGUST 08, and many more. His debut album Amen came out last year.

Revisit our interview with Rich Brian, Joji, and AUGUST 08 below.