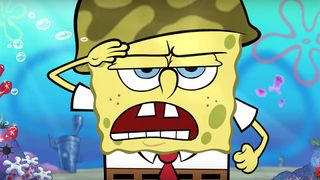 You’ll be able to play as SpongeBob, Patrick, and Sandy, and in addition to rescuing Bikini Bottom, you can underpants bungee jump and even team up in a brand new multiplayer mode.

Developed by Purple Lamp Studios, Rehydrated is coming to PC, PlayStation 4, Xbox One, and Nintendo Switch. As always, be sure to check back with us for more on the anticipated video game.

Who lives in a pineapple under the sea but isn’t coming to E3?@SpongeBob coming to PC and consoles!@Nickelodeon @Purple_Lamp + @THQNordic are happy to announce SpongeBob SquarePants: Battle for Bikini Bottom – Rehydrated!#SpongeBob #SpongeBobRehydrated https://t.co/RpXtIj5XMT