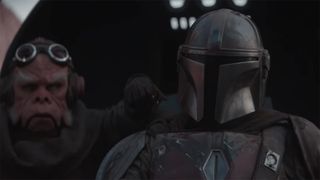 As Disney‘s new streaming service is set to launch next month, we continue to receive previews of Disney+ original content. One of the most anticipated original series coming to the platform is Star Wars: The Mandalorian. Here, we in turn showcase the final trailer for the program, which stars Pedro Pascal, Gina Carano, and Carl Weathers.

Set in the Star Wars universe, The Mandalorian takes place five years following the events from Return of the Jedi. The Jon Favreau-created series ultimately centers around a Mandalorian bounty hunter beyond the reaches of the New Republic.

In addition to creator, Favreau is the lead writer, showrunner, and co-executive producer for The Mandalorian, alongside Dave Filoni, Kathleen Kennedy, and Colin Wilson. Nick Nolte, Giancarlo Esposito, Emily Swallow, Bill Burr, Omid Abtahi, Taika Waititi, and Werner Herzog feature alongside Pascal, Carano, and Weathers in the series, which releases with the launch of Disney+ on November 12. You can look forward to eight episodes in the first season.