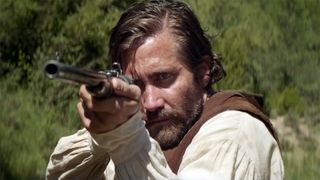 Just yesterday we got a look at Jake Gyllenhaal in Paul Dano’s directorial debut for Wildlife, as now the Academy Award nominee is also starring alongside Joaquin Phoenix in Jacques Audiard’s upcoming dark western comedy, The Sisters Brothers.

Set in Oregon in 1851, The Sisters Brothers is based on Patrick Dewitt’s novel of the same name, centering around brothers Eli and Charlie Sisters, who have been hired to kill a prospector who has stolen from their boss. Phoenix and John C. Reilly team up as the brothers, while Gyllenhaal portrays a character named Hermann Kermit Warm. Riz Ahmed also features in the picture, which is due in theaters later this year.

Press play above for your first look at Jacques Audiard’s The Sisters Brothers.

In other movie news, Jodie Foster is a nurse to criminals in upcoming sci-fi-thriller, ‘Hotel Artemis.’