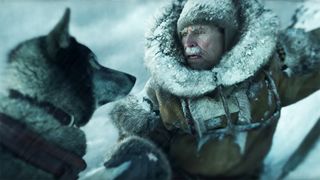 Today Disney+ shares the full-length trailer for its new original film starring Willem Dafoe, titled Togo. The movie tells the true story of Leonhard Seppala (played by Dafoe) and his lead sled dog, Togo, as they journeyed across the Alaskan tundra in the winter of 1925. This particular incident also inspired the 1995 animated film, Balto.

Julianne Nicholson stars alongside Dafoe in Togo, which is written by Tom Flynn and directed by Ericson Core. The Disney+ original comes to the streaming platform on December 20.

Jeff Goldblum Is Fascinated by Everything in His New Disney+ Series
MoviessponsoredOctober 29, 2019
What To Read Next
Load More
Search Results
Load More