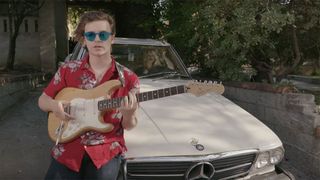 A haze has set in throughout our un-airconditioned top floor office, and needless to say we’re melting. Luckily, this new music video from Tommy Newport is a exactly what we need to beat the heat. Set in Los Angeles, the “I Forgive You” visuals feature the laidback rocker skateboarding with his friends, and breezing by ladies that he’s forgiven.

At only 18 years old, Newport is entirely self-taught, picking up a guitar and a MacBook Pro four years ago and never looking back. The Manchester-born, U.S.-based musician first made waves with his debut album So Long And Thanks released under the name Milmine.

Of his first official music video, Tommy Newport had this to say: “I’m excited to present my first official film set to my music, and I hope it captures the story my lyrics tell.” Emily Kretzer, the video’s director adds: “I wanted to create a visual that complements the vibrancy of the song itself while illustrating an engaging narrative inspired by Tommy’s lyrics. Los Angeles served as the perfect backdrop, and shooting the video both digitally and on VHS really enabled us to bring that vision to life.”

Tommy Newport is currently working on his next album with producer 4th Pyramid. In the meantime, revisit So Long And Thanks below.

For more of our premieres, check out Miss Red’s futurist dancehall on her new song “War.”

This Portable NES Console Will Take You Back to Your Childhood
DesignsponsoredFebruary 10, 2020