Travis Scott’s third studio album, the highly-anticipated Astroworld, was finally released to much fanfare on August 3. The incredible hype surrounding Scott’s latest project was more than matched by the setting of his secret album listening party.

The Astroworld unveiling was hosted last night at Lollapalooza in Chicago and featured a ghoulish, carnival theme.

Highsnobiety was in attendance at the small and intimate event alongside the likes of Virgil Abloh, Shek Wes, Kylie Jenner, and the rapper’s inner circle, which included White Trash Tyler, Chase B, and his personal photographer Rayscorruptedmind.

The ghoulish theme matched the Astroworld merchandise, some of which Travis himself was rocking amongst the dark and mystical setting.

During La Flame’s performance at Lollapalooza, fans were given wristbands from Travis Scott’s team that gained them access to the secret Astroworld listening party. After his performance, the giant Travis Scott head was blown up and guests with bands were invited to enter.

Members from Travis’ team were giving out free merchandise and food from Shake Shack, while La Flame himself was in a good mood, interacting with the guests.

Flip through images of the listening party above and leave your thoughts on the album and Travis Scott in the comments.

The album, which is available on all platforms, features The Weeknd, James Blake, Drake, and many more A-list artists. Listen to it here. 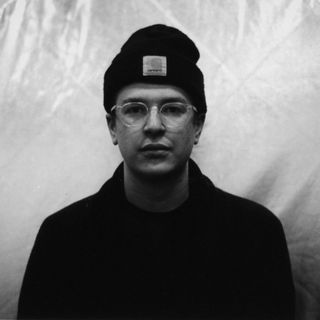