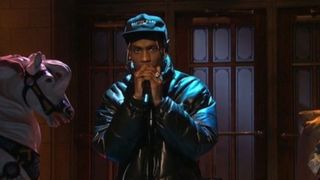 Only one week after Kanye West and Lil Pump performed on the sketch show’s season premiere dressed as water bottles, Travis Scott took over the SNL stage last night. As you may have expected, the Houston rapper chose to deliver a few renditions from his latest album Astroworld. Scott’s segment included a medley of “Skeletons” and “Astrothunder” with an assist from John Mayer, before performing one of the album’s highlights “Sicko Mode,” all while wearing a pair of his collaborative Air Jordan IV sneakers.

Not only that, but during the first sketch of the episode, Scott serves the finishing blow in a heated dance battle, breaking out some moves to the Jeopardy theme song.

Check out some clips below.