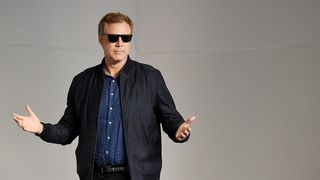 Will Ferrell is returning to host Saturday Night Live this week and to celebrate, SNL shared the comedian’s audition tape from 1995. In it, Ferrell impersonates legendary sportscaster Harry Caray, Senator Ted Kennedy, and performs two original sketches – in one of which he pretends to be a cat.

The actor went on to become a regular cast member on Saturday Night Live following the audition, appearing on the show between 1995 and 2002. While the video above shows off Ferrell’s ability to take on various roles, it’s the two original sketches that are the funniest.

In his “Get Off the Shed” sketch, the Step Brothers star plays a dad at a neighborhood barbecue who gets increasingly annoyed at the kids on top of his shed. The final sketch, in which he plays a man pretending to be a cat, is peak Will Ferrell humor.

Watch the video above, and then check out the honest trailer for ‘Get Out’ here.