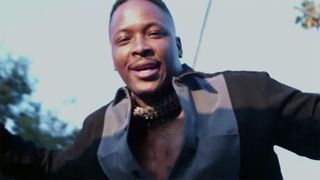 YG has released the visual accompaniment to his summer banger “Big Bank.”

The video features Nicki Minaj, 2 Chainz, and Big Sean, with the latter sporting a Colin Kaepernick jersey in a scene shot in the Oval Office. In addition, there’s an appearance from DJ Mustard — the track’s producer — who flexes his adroitness on the xylophone, while Nicki steals the show, clad in diamonds and at one point mounting a pink pony.

Watch the video above, and then peep the cut for 2 Chainz’s new jam, “PROUD,” which features YG, Offset and Chainz’s mom.

In other music news, Playboi Carti moshes out in the “R.I.P” video.