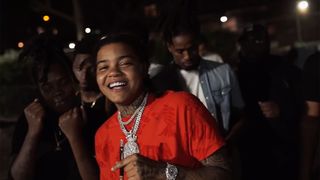 Young M.A is back with a new song and accompanying video. This time the rapper spits mean rhymes on the streets of Brooklyn, letting it be known that she’s still “out here” running things.

“No Bap Freestyle” sees a boastful M.A flexing her street cred and rap prowess, surrounded by her day ones. Rocking diamond grillz and icy chains, the rapper keeps it real, showing off her signature braggadocios rhymes. She raps “Ask about me and my city they like she out here / I’m the queen out here.” Check out the video above.

The song is meant to promote her upcoming debut album and will not appear on the official track listing. Young M.A is set to release her long-awaited project Herstory in the Making on September 27th independently without a major label. You can pre-order it here.