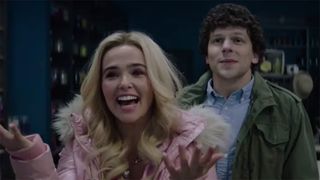 Late last month we received our first look at the long-awaited Zombieland sequel, Zombieland: Double Tap. As a followup to the initial clip, today we receive the international trailer, which boasts a new scene.

The video introduces us to the gang’s new member, Madison, who is played by Zoey Deutch. Deutch joins Woody Harrelson, Jesse Eisenberg, Emma Stone, and Abigail Breslin, all reprising their roles from the original film. Rosario Dawson, Avan Jogia, Luke Wilson, and Thomas Middleditch also appear in the sequel.

Zombieland: Double Tap is set 10 years after the first movie. In the picture Tallahassee (Harrelson), Columbus (Eisenberg), Wichita (Stone), and Little Rock (Breslin) set out on a new adventure all while maneuvering through the zombie apocalypse.

You can look forward to Zombieland: Double Tap coming to theaters October 18.

Vans’ New Double-Stacked Sole Is the Brand’s Comfiest Yet
SneakerssponsoredJanuary 3, 2020

New ‘His Dark Materials’ Trailer Introduces the Girl Who Will Change Worlds
MoviessponsoredAugust 27, 2019
What To Read Next
Load More
Search Results
Load More